I need to reconfigure grub to use a different install device. Other threads indicate that there will be a screen that prompts me to select a device:

However, no such screen exists. It exits after the 2nd one.

How do I select the boot device? 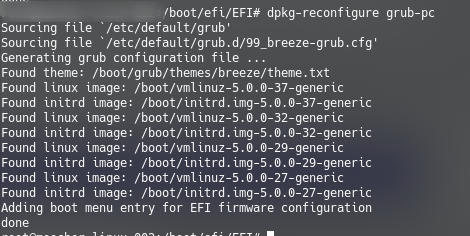 This appears to be due to a change introduced to avoid potential corrupted systems. I’ve filed a bug report about this as this just bit me during a RAID failure.

Update: The bug has been confirmed and triaged as high priority against basically all supported versions of Ubuntu.

Update #2: Fix has been released for Focal and Groovy! I’m hoping someone on the Ubuntu team is tracking Bionic.

Update #3: Fix has been released for Bionic!