I want to deny some of the applications on my computer to access certain drives or logical volumes, but couldn’t find a solution so far.

Background: My PC has an SSD as system drive and a 15TB Raid-6 w/ five harddrives. The controller is configured to spin down the drives after ~10-15 minutes. This is fine since sometimes I don’t need to access anything on the Raid for a couple of hours or even longer. Some applications such as Adobe Reader access all logical volumes when starting for some reason I cannot comprehend. My assumption is that all volumes with a drive letter assigned are affected. Removing the letters and re-assigning them isn’t an option at all 😉

How can I restrict Adobe Reader or other applications from accessing these volumes my Raid hosts?

In Windows, there is no native supported way to block certain processes from accessing certain drives, that goes “against the current nature” how the operating system handles drive access.

The right for access is determined by the logged on user’s rights who starts the application. So if the software developer decided his software should search all accessible drives and does not give you the option to turn that off… well, that’s bad programming which does not consider your particular use case. But there are a few workarounds.

The only “sure” solution is 2, since the hardware virtualization layer (from the virtual machine) can block any applications to attempt to access the “real hardware” completely. Although I haven’t had the case where solution 1 doesn’t work, but theoretically I think it could be bypassed.

It’s possible to disable the volumes on a lower layer by disabling the drives altogether, but this will disable all volumes on the drive. Manually, you can do it by starting diskmgmt.msc, then right click on the drive and mark it “offline”. 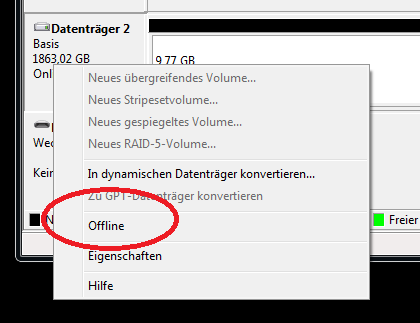 If needed, you should be able to do that using a command line script as well. It would be applied a similar way as Option 3a/b. You can do that, for example, via cmd as described here or via PowerShell, as it is described here.

You can deactivate the drive’s driver altogether. To do in manually: start diskmgmt.msc, then right click, choose “options”. Then go to the “Driver”-Tab and select “Deactivate”. The drive will “disappear” in the disk manager and won’t be accessible through the operating system anymore. Unless the software doesn’t execute machine code commands to communicate directly with the hardware, there should be no way for the application to access the drives. At least as far as my knowledge of the ins and outs for operating systems goes. 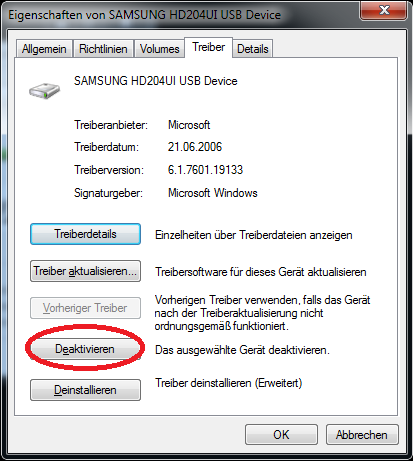 If needed, you should be able to do that using a command line script as well. It would be applied a similar way as Option 3a/b using, for example, Devcon.exe. You can find a detailed description here.

If running the application within a virtual environment is an option at all, there are plenty of solutions out there:

Option 3 – Unmounting just volumes (leaving the drive “intact”) – No additional software needed, BUT it might not work in your case

Alternatively, you could just leave the drive unmounted in general and mount it via a batch file that mounts the drive which you start manually when needed. After you’re done using it, you can manually unmount it using a second batch file. You could automatize that by monitoring file system access requests and mount/unmount the drive as required following certain rules e.g. that certain applications won’t have access. But I’m not sure automation is worth the extra effort involved.

Option 4 – Restricting access to a drive-letter (volume). Simple to do, but two small tools from Microsoft needed – BUT it might not work in your case

If you want to do it without 3rd party software but don’t mind to use two small tools from Microsoft (if you don’t use it already). I prefer this solution because it gets the problem “by the root” (differentiation between the user’s and the application’s rights) and it’s fairly simple and no “big” third party software is needed.

Basically, you add a user with no access to the drive and then you start the program with those limited rights (you will still log on as your regular user, you won’t use the restricted account to log on).